Herding lessons for ALL Dogs!

Gabe is Eastern Oregon born & raised. As a kid, he helped out his uncle on a sheep and cattle ranch every chance he got and was active in 4-H and FFA.  After high school, he fought wild fires in the summer and worked for a cattle ranch in the winter helping feed and work 500 cow calf pairs before join the Unted States ARMY. 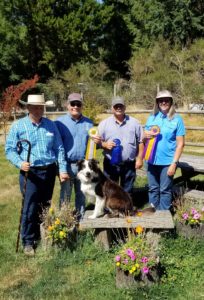 While on active duty at Ft Lewis, Gabe handled and trained a Border Collie, trialing on cattle, sheep and ducks. Besides earning all three titles in the ASCA herding program, Gabe and is BC received a High Other Breed Award. Gabe has handled several dogs and has put Herding Titals on all dogs he has trialed. Gabe and his dog "NZ Low Cash Cowboy" or "Sue" have earned their Started Title in Cattle, Open in Sheep and Started title in Ducks through ASCA.  Gabe and Sue also have received High in Trial in several trials and High Other Breed in his last Trial.

After a few years, Gabe joined the staff giving lessons and working other folk’s dogs. Gabe's lifelong dream was to run his own herd dog training buisness for ALL people and dogs!

Paty was born and raised on a small family ranch south of Eugene. Paty grew up showing pigs and horses in 4-H and has ridden Performance Equestrian Drill Team since she was ten years old.

with their dogs while not only 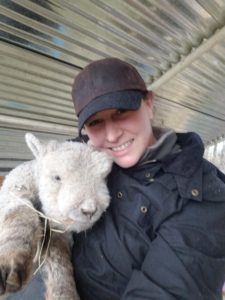 herding, but participating in any dog sport and having fun! Paty is an Animal Control Deputy and loves to help her community with all animal related issues.

Paty loves  being a sheep farmer and enjoys working her dogs, Border Collie "Texas Red" and Kelpie "Ciz", and riding her horse "Hondo" an Azteca. P